What A Wagging Tail Really Means

Science is always providing new information that allows us to interpret the behaviors of dogs, or to reinterpret behaviors which we thought we understood very well—such as the meaning of a dog's tail wagging.

Perhaps the most common misinterpretation of dogs is the myth that a dog wagging its tail is happy and friendly. While some wags are indeed associated with happiness, others can mean fear, insecurity, a social challenge or even a warning that if you approach, you are apt to be bitten.

In some ways, tail wagging serves the same communication functions as a human smile, a polite greeting or a nod of recognition. Smiles are social signals and are thus reserved mostly for situations where somebody is around to see them. For dogs, the wag seems to have the same properties.

Since tail wagging is meant as a signal that a dog will only wag its tail when other living beings are around—a person, another dog, a cat, a horse, or perhaps a ball of lint blown by a breeze and seemingly alive. When the dog is alone, it will not give its typical tail wags, in the same way people do not talk to walls.

Like any other language, tail wags have a vocabulary and grammar that needs to be understood. Up to now scientists focused on two major sources of information, namely the tail's pattern of movement and its position. However new data adds a third important dimension to understanding the language of the canine tail.

Movement is a very important aspect of the signal. Dogs' eyes are much more sensitive to movement than they are to details or colors, so a moving tail is very visible to other dogs. Evolution has made tails even more visible, such as tails with a light or dark tip, a lighter underside or a bushy shape.

The tail's position, specifically the height at which it is held, can be considered a sort of emotional meter. A middle height suggests the dog is relaxed. If the tail is held horizontally, the dog is attentive and alert. As the tail position moves farther up, it is a sign the dog is becoming more threatening, with a vertical tail being a clearly dominant signal: "I'm boss around here," or a warning, "Back off or suffer the consequences."

As the tail position drops lower, it is a sign that the dog is becoming more submissive, is worried, or feels poorly. The extreme expression is the tail tucked under the body, which is a sign of fear: "Please don't hurt me."

Just as there are different dialects to a human language, such as a southern drawl or a New England twang, there are also dialects in dog tail language. Different breeds carry their tails at different heights, from the natural nearly vertical position common to Beagles and many Terriers to the low-slung tails of Greyhounds and Whippets. All positions should be read relative to the average position where the individual dog normally holds its tail.

Movements give additional meaning to the signals. The speed of the wag indicates how excited the dog is. Meanwhile, the breadth of each tail sweep reveals whether the dog's emotional state is positive or negative, independent from the level of excitement.

As a result, there are many combinations, including the following common tail movements:

We can now add another newly discovered, feature of dog tail language that may surprise attentive pet owners as much as it surprised scientists like me. It now appears that when dogs feel generally positive about something or someone, their tails wag more to the right side of their rear ends, and when they have negative feelings, their tail wagging is biased to the left.

Giorgio Vallortigara, a neuroscientist at the University of Trieste in Italy, and two veterinarians, Angelo Quaranta and Marcello Siniscalchi, at the University of Bari published a paper describing this phenomenon in the journal Current Biology. The researchers recruited 30 family pets of mixed breed and placed them in a cage equipped with cameras that precisely tracked the angles of their tail wags. Then they were shown four stimuli in the front of the cage: their owner; an unfamiliar human; a cat; and an unfamiliar, dominant dog.

It is important to understand that we are talking about the dog's left or right, viewed from the rear as if you are facing in the direction the dog is viewing. Meaning that if you are facing the dog and drew an imaginary line down the middle of his back that positive right-sided signal would appear as tail swings mostly curving to your left. 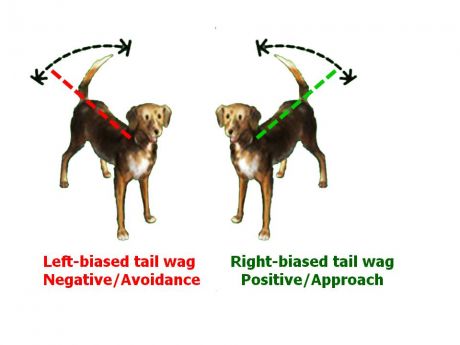 This is not as strange a finding as you might think at first. Research has shown that in many animals, including birds, frogs, monkeys and humans, the left brain specializes in behaviors involving what the scientists call approach and serenity. In humans, that means the left brain is associated with positive feelings, like love, a sense of attachment, a feeling of safety and calm. It is also associated with physiological markers, like a slow heart rate. Contrast this to the right brain which specializes in behaviors involving withdrawal and energy expenditure. In humans, these behaviors, like fleeing, are associated with feelings like fear and depression. Physiological signals include a rapid heart rate and the shutdown of the digestive system.

Unfortunately, if your dog's tail is docked to a short stub it is going to greatly reduce your ability to spot this signal and deduce what your dog is feeling at the moment.

Stanley Coren is the author of many books including: Born to Bark, The Modern Dog, Why Do Dogs Have Wet Noses? The Pawprints of History, How Dogs Think, How To Speak Dog, Why We Love the Dogs We Do, What Do Dogs Know? The Intelligence of Dogs, Why Does My Dog Act That Way? Understanding Dogs for Dummies, Sleep Thieves, The Left-hander Syndrome