Original post The Canine Equivalent of the Teenage Years by Dr. Karen Shaw Becker on Healthypets 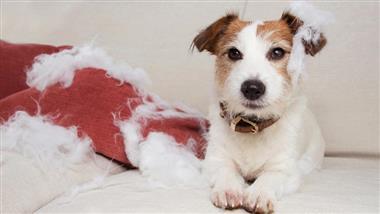 As many dog parents and trainers have long suspected, our canine friends do indeed go through a version of the terrible teens

A new U.K. study confirms that adolescent dogs between 6 and 12 months of age experience a “passing phase of reduced obedience” toward their owners

The 8-month mark is especially impactful, and if dog parents aren’t prepared for a period of teenage rebellion, they can mishandle the situation to everyone’s detriment — especially the dog’s

Like human teens, teenage dogs are more apt to follow direction from strangers than from their owner

By the time dogs reach one year of age, their behavior returns to what it was pre-puberty and, in most cases, improves

Many of us who have raised a dog from puppyhood into adulthood have watched our angelic, compliant pup morph into quite the four-legged handful at around 6 to 12 months.

Interestingly, this period in the average dog’s lifespan is the equivalent of the teen years in humans, and science is once again confirming something many of us already suspected about canine behavior: teenage dogs, like teenage kids, can be difficult to get along with!

Dogs Go Through a Period of Teenage Rebellion

“Our new study … confirms what many dog owners and dog professionals have long suspected: that dogs have a passing phase of reduced obedience towards their owners during puberty. The study also highlights a fascinating interaction between puberty in dogs and the type of attachment the dog shows towards their owner.

All mammals (including humans and dogs) go through a period of change known as adolescence, when the child develops into an adult, both behaviourally and reproductively. Puberty is the process through which animals become reproductively mature, with behavioural maturity reached much later, at the end of adolescence.”2

In humans, adolescence is a long period of change during which the brain is actually “remodeled” from that of a juvenile to that of an adult, Asher and Harvey explain. This remodeling is driven by intense hormonal changes that impact behavior, including reduced impulse and emotional control, and increased irritability and risk-taking. This roller coaster ride begins in kids at age 8 to 9 and lasts through the mid-20s.

“Research shows us that adolescence is a vulnerable time for child-parent relationships, with increased conflict typical of this phase,” the co-authors write.

“There are also links between adolescent-phase behaviour problems and the quality of the child-parent relationship. Children who have insecure attachments towards their parent figures have been shown to enter puberty earlier and exhibit greater conflict with their parents during adolescence.”3

The 8-Month Mark Is Especially Impactful

The researchers hypothesized that dog adolescence might also be a challenging time for dog-owner relationships. “Puberty [around 8 months in dogs] is expected to particularly impact the dog-owner dynamic due to the competing desires to live with their human family and to seek out and reproduce with other dogs,” write Asher and Harvey.

To test their theory, the research team followed a group of guide dog puppies during their first year of life, and indeed, right around 8 months they found the dogs became less willing to follow commands given by their humans and were also harder to train.

"This is a very important time in a dog's life," Asher told online publication Tree Hugger. "This is when dogs are often rehomed because they are no longer a cute little puppy and suddenly, their owners find they are more challenging and they can no longer control them or train them. But as with human teenage children, owners need to be aware that their dog is going through a phase and it will pass."

According to Asher, people often feel like they’re failing as dog parents when their puppies reach adolescence. In response, some punish their dogs, some ignore them, and saddest of all, some send them away.