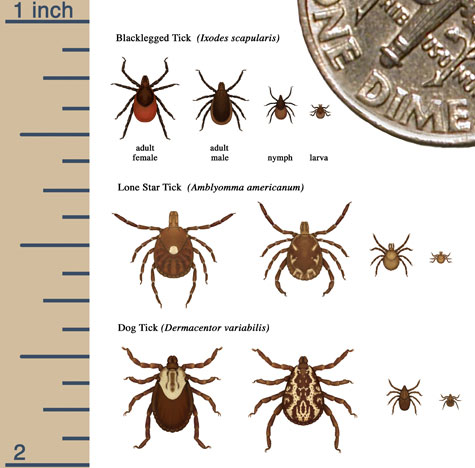 One minute, my husband and I were having a perfectly ordinary conversation in the kitchen. In the next moment, I was ripping off my sweatshirt, my T-shirt, and what I had on under that. No, my husband’s words were not seductive and it wasn’t a hot flash. Can you guess?

With all the restrictions on socializing, my only recreation has been taking my dogs for walks – and three times in the past week, I’ve suddenly felt the unmistakable sensation of something crawling on my body where nothing ought to be crawling. The one that made me rip off my clothes in the kitchen was the third one!

The first one woke me out of a dead sleep. I had fallen asleep on the couch while watching a late-night movie, and woke up thrashing – a tick was walking across my wrist! Somehow I came wide-awake immediately and managed to precisely grab the insect – a big dog tick – between my fingers. Nothing, and I mean nothing, has ever awakened me so quickly, zero to 60, as fast as that feeling.

The second one was while we were walking on a trail. I felt what I thought was maybe a mosquito on my neck. But when a wave of my hand didn’t stop the feeling of something tiny touching me, my fingers explored and I felt the insect crawling along my hairline. I flung it away from me and immediately regretted the action; it would live another day! Darn it! I could have killed it!

The only solace I have regarding the current infestation, typical for this season in this area, is that I haven’t (yet) discovered a tick that had already embedded itself on my body somewhere. I have pulled a couple off of Otto – who is a tick magnet – and just this morning, removed a teeny deer tick, smaller than the head of a pin, from Woody’s eyelid, where it was almost invisible among his eyelashes (he kept rubbing his eye, which made me investigate further). But so far, my sensitivity to the crawling sensation has kept me safe from a bite.

I’m struggling as I write this to keep myself from investigating an imagined crawling sensation every few minutes. I don’t have a tick on me now – at least, I am pretty sure I don’t – but after every discovery of one of the creepy insects, I suffer from lingering paranoia for days. Ugh, I despise them!

I have been flea-combing the dogs assiduously after our walks, and yet, somehow, ticks are getting brought home and into the house – and onto the sofa and onto me! This is making me wish for some sort of pressurized airlock that the whole family (canine and human) has to pass through in order to get into the house, something powerful enough to blow all loose particles off of us and into a flame chamber. If you’re an engineer, you can patent that puppy for free! Just send me a unit when it goes to market, will you?

What do you do that works best for protecting your family (canine and human) from ticks?