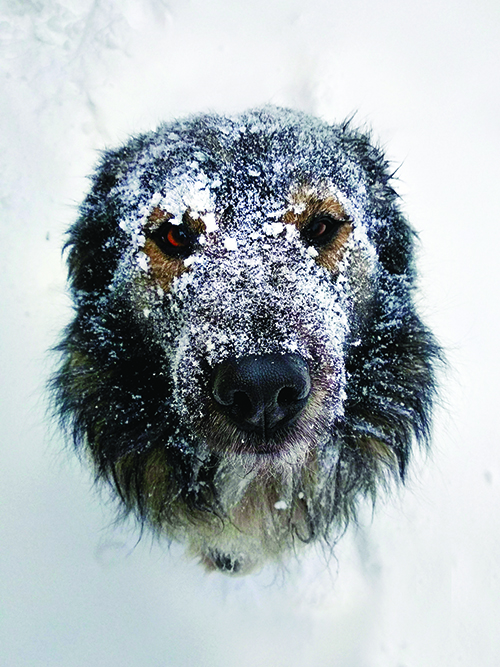 One might think that growing up in Illinois, Ohio, and Wisconsin would have inured me to the effects of bitter cold, hip-deep snow drifts, and blinding blizzards, but I think it did the opposite and sensitized me to those frigid conditions, instead. I freely admit I am not fond of winter. My aversion to winter is not without just cause. Here is a partial list of cold-weather dangers:

Hypothermia and frostbite. These are very real concerns in frigid climes. Signs of frostbite include discoloration of the affected area of skin (this discoloration is often pale, gray, or bluish); coldness and/or brittleness of the area when touched; pain when you touch the body part(s); swelling of the affected area(s); blisters or skin ulcers; areas of blackened or dead skin. Severe cases of frostbite can result in permanent disfiguration or alteration of the affected tissues, or worse, amputation or surgical removal of the necrotic (dead) tissues.

Signs of hypothermia can include strong shivering and trembling followed by no shivering; acting sleepy, lethargic, or weak; fur and skin are cold to the touch; body temperature is below 95° F; decreased heart rate; dilated pupils (the black inner circle of the eye appears larger); gums and inner eyelids are pale or blue; trouble walking; difficulty breathing; stupor, unconsciousness, or coma.

Antifreeze poisoning. Spilled antifreeze presents a serious danger to your dog. Dogs are attracted to antifreeze because of its sweet taste, but just a lick or two can be deadly. There are antifreeze formulations that contain a bitter substance intended to deter ingestion, but they are still toxic if consumed.

Antifreeze poisoning happens in two stages. In the first, which happens three to six hours after ingestion, your dog appears drunk – staggering, vomiting, falling down, and peeing a lot. Then your dog may appear normal, until the second stage begins, when the body starts to break down the ethylene glycol into other chemicals such as aldehyde, glycolic acid, and oxalate. This stage is dangerous because it can cause severe to fatal damage to the kidneys. If you suspect your dog has ingested antifreeze, get her to a veterinarian immediately.

Ice-melting chemicals. The calcium and sodium chloride in rock salt that is used to treat roads and sidewalks is toxic to your dog. Dogs get the salt on their paws and fur, and lick it off to clean themselves. Signs of salt toxicity include extremes in water consumption (your dog may either drink excessively or stop drinking altogether); vomiting; diarrhea; lethargic or “drunk” behavior; seizures.

While “pet-safe” salt is safer than regular rock salt, like “pet-safe” antifreeze, it is still not completely safe. Take precautions to avoid ingestion, and contact your veterinarian if you think your dog might have salt toxicity.

Falling through ice. Every winter brings tragic stories of dogs falling through pond or river ice, and drowning or freezing to death. Sometimes the tragedy is compounded by the death of the human who tried to save the beloved dog. If your dog doesn’t have a rock-solid recall, keep her safely on leash when you are around frozen water. If she does fall through, call 9-1-1 rather than trying to rescue her yourself. If you must rescue her, study up on ice-rescue safety precautions well in advance, and be very careful!

Heaters. A chilly dog can become a heat-seeking missile and may try to cozy up to the heaters in your home. Caution: She can burn herself on a wall heater or wood-burning stove, or knock over a space heater and start a fire. If your dog is prone to trying to get as close as possible to the source of your home’s heat, use management tools to prevent her access to any heat source that might be dangerous. Provide her with a pet-safe heating pad; these products have chew-resistant cords, and heat up only to a pet’s internal body temperature. Alternatively, give her a cozy den with plenty of warm blankets she can burrow under.